“Rien taught me how to ride the whole horse. He makes it very simple and breaks it down into little pieces.

It’s amazing what a few weeks of this program has produced. I’m so thankful!

I greatly appreciate Rien’s program. To elaborate, I’m a visual learner and set my IPad on the treadmill and watch Rien’s training videos over and over so I have his words in my head. I ride a fairly hot, sensitive mare who is very uphill. Thanks to Rien; I realized that I was holding just enough so that she was light but not trusting my hand enough. It’s amazing what a few weeks of this program has produced. I’m so thankful! 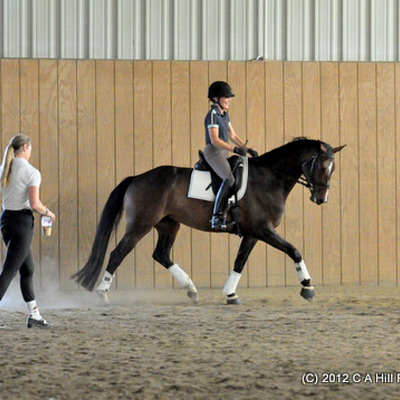 I’ve already learnt so much from the training! I’m really happy we chosen to go down this path

I was really impressed by the demonstration of Rien van der Schaft at the Masterclass and I became really curious about his training method. I hesitated whether to sign up for the online program, but eventually decided to do so. I figured it was about the same investment as four private lessons, so the price made sense to me.

First of all I want to make compliments about the structure and quality of this program. The videos are really clear and easy to follow. There’s a logical structure and a good foundation of the purpose and goal of the training.

…there has been significant progress. My horse has a much better connection from behind to the front and I feel his hind legs more coming under the body. This also reflects in the front. Before my horse had the tendency to seek support from my hand and he would lean onto his shoulder. Now we have the right connection and more self-carriage.

I’ve also noticed her body has changed. She has become more muscular and also the top line has become more round. She moves more freely from the shoulder and she has more activity from behind. I’ve already learnt so much and I’m happy we’ve chosen to go down this path.

It made up for the investment more than I could think of and I’m definitely going to continue riding according this training method. Thank you so much for sharing your training method in this way. It has already helped me a lot!

I now have the voice of Rien in my head that says: ‘don’t do it’ when I’m tempted to create a certain head-neck position

Rien van der Schaft is very calm when he’s training his horses and that also motivates me to be more calm. Take your time, no pulling and no forcing of the head-neck frame. When I’m tempted to influence the head-neck position, I now have this voice of Rien in my head that says: ‘don’t do it.’ Because of the tips in the Training Fundamentals Test and the tips in the email, my horse is now more relaxed and responds more quickly to the aids. I’m just more alert and more aware when I’m training my horses.

I have really enjoyed the online program ‘From Basics to Grand Prix’ of Rien van der Schaft. I’ve applied the tips and information to both my older as my young horse. It’s very inspiring to see how much emphasis Rien puts on the training fundamentals and that he really takes the time for each horse. I’ve learnt the most from the movements you can apply when you have certain problems or when you want to build strength for the collection. The videos in which Rien teaches other riders are also very interesting! Because you then get to see similar problems you’re facing as well and how you can solve them.

“It’s really important both you and your horse understand the training method and that it’s logical. You don’t want to give complicated aids, but you want it to be simple. Rien has really helped me with that.

Last year I bought a young, inexperienced horse to train to become a vaulting horse for my daughter. Obviously he can’t just go around in circles, so I decided to start riding again. However, I hadn’t ridden in years! And not to forget, my body had changed since the last time I had ridden a horse. I had put on 40 pounds and just wasn’t in shape.

Nonetheless, the first time I got on my horse I had a lot of confidence. But as soon as I started riding I noticed that not only did my horse lack balance, so did I! And then you realize that you can’t ride anymore. At least not on the level you once had. And I can tell you that’s a pretty big pill to swallow if you’ve had a professional career in training horses.

After two months I fell of my horse which caused a pretty severe trauma. The first month I knew for sure I would never ever get on a horse again. I had never felt that kind of fear before even though it hadn’t been the first time I had fallen off a horse.

but after a while a started to have doubts. Giving up on the riding just wasn’t an option for me. However, getting started again felt like a huge deal. I went to a demonstration of Tristan Tucker because I was looking for a way to work with my horse that would bring back the trust we both needed.

The demonstration was very inspirational and it motivated me to start doing groundwork. That led to very good results! Before my horse didn’t want to get on the trailer, but with the TRT method we could solve that problem.

My horse became more relaxed, but still, I didn’t have the courage to start riding. At one night, I downloaded the Training Plan just because I was curious. I started answering the questions and it really made me think about what I wanted and what was holding me back.

I could see I wanted to ride competitions again and that I wanted to get to at least Medium Level, but then I would really have to change my approach. I therefore set goals and thought about all the steps I had to take. Step 1: Get on your horse!!! That was still something that scared me. But also because of the Training Plan I knew that if I wanted to achieve something, I really had to go for it. So with sweaty hands and my legs shaking, I finally got the courage to get on my horse.

Now I can ride my horse again without being afraid, but it will never be like ‘the good old days.’ But you know, that’s okay. However, I do have a goal for this year to start riding competitions again. And for the first time in 20 years I’m also going to take lessons. I’m glad I’ve taken the steps to move forward!

What has really helped me are two things. First of all the Training Plan, but also reading your tips in email. That made me realize that even though I thought I had a goal, I didn’t really take the steps to get to my goal. I wasn’t self-critical enough and therefore didn’t really make progress. I now formulated steps to get to my goal and all of a sudden everything makes more sense.

After seeing Rien at the Masterclass, I’m convinced you can reach the top in dressage in a friendly way. And to be honest, before I wasn’t that convinced about that. The week after the Masterclass, I saw Rien with a student at a subtop dressage competition. The nice thing about that was that I could see that he actually does what he tells at his demonstrations.

The website and the online programs are superb. I cannot believe how clearly, calmly and simply Rien explains everything. He has made a huge difference to my understanding. 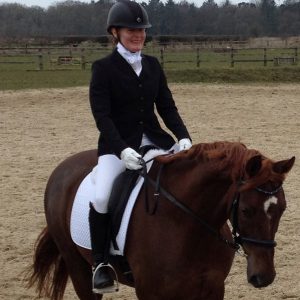 “When I see Rien riding I think to myself: ‘That’s how I want to ride as well and not any other way!’

The first time I met you was at the Masterclass. That day in Ermelo you walked around a little bit uneasy with that microphone in your hand, but man, I was so impressed you had organized that event!

What really stood out for me that day was the smile on the face of Liesbeth Geven with her amazing black horse. Wow, she really enjoyed it and also said that to the crowd. I really loved seeing that. To me that was passion!

When I read your blogs and emails, I also see that passion. I often recognize myself in what you write and it creates more awareness. That hunger for knowledge; I recognize that. I’m just glad there are more crazy people like myself out there! 😉
[/read]

Because of your tips we’ve become a better team

I’ve been working with the Training Plan for almost three months and I’ve noticed we’ve made a lot of progress, both mentally as physically. I also learn a lot from the tips you send in email. For example that you shouldn’t just correct your horse, but also reward him. I now do that more often and my horse Chico has really improved because of that. And it also makes me happy! I want to thank you for all of your good tips and I hope you’ll be sharing a lot more of them because it really helps! Because of your tips we’ve become a better team and, more importantly, our bond has become stronger.

How much of a difference can a visit to the Masterclass make? A lot!

Questions I’ve had for a long time, both consciously and unconsciously, now finally got answered

I’m really happy for myself and for my horses that I’ve decided to start with the online program of Rien van der Schaft. Questions I’ve had for a long time, both consciously and unconsciously, now finally got answered. The biggest learning point to me is definitely the contact rein.

I’m sure my horses will be thankful I’ve learnt more about that. The online program also motivates you to really start practicing with the tools you get and creates more awareness.

I often think to myself I’m ‘just’ a recreation rider, but when I read the emails and blogs of DressagePro, I emphasize the same things. I also try to have the right management for my horses. I also want them to get enough movement. I also give by horses sports massages, but I realize that training the muscles in the right manner is most important. That’s why I’m so happy I can add the information this online program has given me to my backpack.